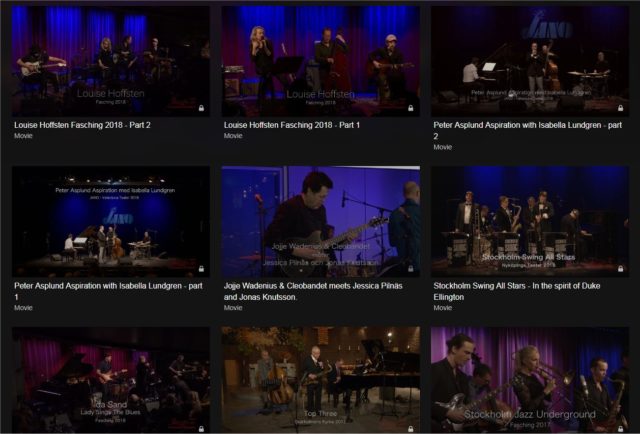 Bo Lindström, a well-known cameraman and tv-producer, and Magnus Jonsson, an experienced sound engineer, met one evening in the summer of 2017 to discuss an idea about their common interest, Jazz. Bo has been working with television productions since the mid-1970s for Swedish Broadcasters like SVT, TV4, TV3 and various private companies. He lived for a number of years in the UK and was among others commissioned by Sky, Chanel 4 and BBC. Magnus has over 30 years of experience in audio technology, working with live scenes and PA-systems for music as well as studio productions. He currently owns one of Sweden’s largest music studios in Norrköping, 100 miles south of Stockholm.

A seed was sown that evening in the summer of 2017, and on February 1st this year, www.jazztv.se launched the streaming service, where concerts from all over the country’s jazz scenes can be seen via mobile-phones, computers and on TV. The main idea is to support Swedish jazz and through close collaboration with the artists bring the music to a wide national and international audience.

”Swedish jazz holds extremely high quality overall,” says Magnus Jonsson. Everywhere in the country there is a great jazz-musician. It’s just a shame that they do not always reach out with their music.

So, every week they present two unique jazz concerts from Sweden with the best bands and artists in the jazz-genre. Bo and cameraman Gunnar Ernblad work with six cameras, two mobile and four fixed. Magnus records each instrument onto separate channels and afterwards everything is edited, mixed and mastered back at the studio in Norrköping. The result is a high-quality concert, both image and sound, full HD and in stereo.

Bo and Magnus are jazz musicians themselves and it is evident in their productions, they know the music and the final products show and excellent choice of angles nicely focusing on the artist that carries the tune at any given time. ”I am very tired of watching concerts on television where the pianist is playing under a guitar solo, says Bo. As a musician, I want the camera to focus on the right soloist”.

www.jazztv.se offers new concerts each week by artists with varying styles, swing, blues, funk and fusion, recorded on different scenes around the country. The service is meant to benefit both the musicians and those who appreciate the amazing jazz scene that our country has to offer. Artists get a chance to reach out to their audience and jazz enthusiasts who lack channels to find the right good music within the genre finally get a place to meet. All material is unique and cannot be found anywhere else.

Jazztv.se offers around two new concerts each week but will also include reports and interviews with interesting profiles as well as workshops and seminars. As the idea is based on close collaboration with musicians and associations, 5% of all subscription revenues are also deducted and goes to support Swedish Jazz and development efforts within jazz in Sweden.