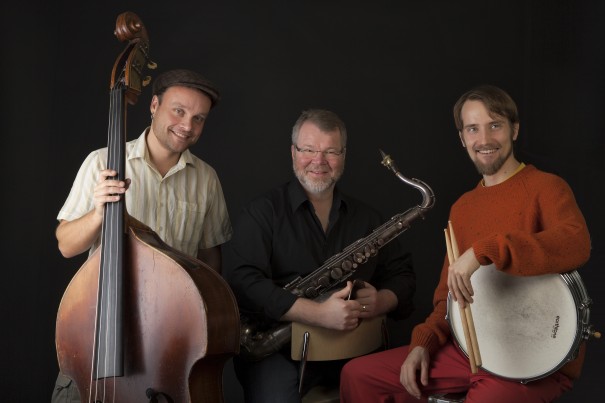 Black Motor has always been about gifted, open and versatile musical minds coming together and heading into the unknown without fear. After ten years, a new page is turned as drummer Simo Laihonen and bassist Ville Rauhala bid farewell to Sami Sippola and invite Tane Kannisto to join forces with them.

Black Motor has always been about gifted, open and versatile musical minds coming together and heading into the unknown without fear. After ten years on this journey, a new era begins as founding members, drummer Simo Laihonen and bassist Ville Rauhala, invite saxophonist Tane Kannisto to join forces with them in the ongoing exploration.

A new page is about to be turned in the trio’s history books after dozens of fascinating shows and a total of nine albums. But in order to predict the future or even understand the present we must backtrack into the past.

Even though the original members of Black Motor came from the coastal town of Pori, the rural municipality of Kangasala and the small inland city of Jyväskylä, the roots of the trio lie deep in the soil of the city of Tampere. Saxophonist Sami Sippola, bassist Ville Rauhala and drummer Simo Laihonen could undoubtedly have congregated elsewhere as well, but the easy-going, brotherly and welcoming rock and jazz community of Tampere provided the perfect breeding ground. After taking their individual tentative steps in the scene, a new band became an inevitability.

After the first show under the moniker of Black Motor in May 2005, momentum started to gather rapidly and it took less than two years before two recordings were

out. Released in 2007, Black Motor and On Duty document a diamond in the rough: The ambitious group was nothing if not bursting with potential and bravado.

More albums and appearances both as a trio and with exciting guests followed, and media started to take note – first locally, then globally. As a 2009 concert at Tampere Jazz Happening was reviewed by All About Jazz, special attention was directed to the backseat: ”Laihonen inserted a Milford Graves and Hamid Drake-like polyrhythmic display underneath the two-horn frontline.”

At this point Black Motor had four albums out. Both Club El Toro and Vaarat vastukset had been released in 2008, and word kept spreading like wildfire. Pushed along by well-received gigs where Sippola, Rauhala and Laihonen were joined on stage by top improvisers such as guitar master Jukka Orma and woodwindsman Jorma Tapio, the hard-working jazz trio was breaking out of its mould as a cult band.

Another vital aspect of the big picture already at this stage were the school concerts. Begun in 2009 and continuing to this day, Black Motor tours Finland periodically arranging workshops for and appearing in front of school children and students from the elementary grade to music colleges.

Gigs abroad were also appearing in the calendar at a quickening pace and a milestone was reached as a particularly riveting show was released as Black Motor’s fifth album. Never Out of Fashion – Live in Amsterdam came out in 2010 paving the way for a breakthrough.

As the Finnish jazz scene then was dominated by recycled hard bop and somewhat stale soul jazz, Black Motor’s free and raunchy outlook was a welcome breath of fresh air. The gutsy band that was once dubbed “grunge-like in persona, music and name” by All About Jazz had become Finland’s most talked about improvising team.

The point of no return arrived in 2011 with the release of Hoojaa. Whereas all Black Motor’s previous discs had mainly documented the driven band as it interacts on stage, the sixth album had more focus. Built exclusively on Kusti Vuorinen’s compositions, this was Black Motor distilled and forged into something timeless. No wonder that Hoojaa was shortlisted for the annual Jazz-Emma (i.e. the Finnish equivalent of the Jazz Grammy).

Keeping true to the arduous die-hard spirit, next year’s yield was another two albums: Jumehniemi a meandering trio effort, Rubidium a more concentrated set featuring celebrated trumpeter Verneri Pohjola as special guest. At this point, favourable reviews were par for the course both in Finland’s biggest daily newspapers Helsingin Sanomat and Aamulehti as well as leading Finnish rock magazine Soundi.

And the juggernaut rolled on. Come summer 2012, with the list of featured live guests grown to include pianist/harpist Iro Haarla, guitarist Raoul Björkenheim and reedsman Jone Takamäki, Black Motor upped the ante by announcing that

legendary saxophonist Peter Brötzmann would join them on stage at their home arena, Club Telakka in Tampere. ”Black Motor sound refreshingly hard and gruff”, commended Brötzmann in a later interview with Soundi magazine. Before 2012 came to an end, the band also found time to perform with pianist/composer Samuli Mikkonen and lauded saxophonists Juhani Aaltonen and Mikko Innanen, on separate occasions. The triumphant year was wrapped up with a landmark appearance at the London Jazz Festival.

As 2013 turned into 2014, the co-operation with Verneri Pohjola was taken to the next level as Sami, Simo and Ville recorded an albumful of Edward Vesala’s compositions with him. The selection takes the listener from the blazing rhubato of Together to the straight rolling Butterfly of Wisdom to the whispering, lullaby-like Iltalaulu and further. This highly anticipated disc will be released by TUM Records in 2015.

All in all, 2014 was to become another watershed for Black Motor. Springtime was heralded by the trio with the cd release of 2012’s lauded Jumehniemi and a string of special shows with guests ranging from jazz pianist Seppo Kantonen to prog guitarist extraordinaire, Pekka Rechardt of Wigwam fame.

But in the end, the year turned out to have a dark undertone. As the first ten-year cycle of Black Motor was closing and preparations for the anniversary festivities were already taking shape a bomb shell dropped. The improbable had become unavoidable as Sami Sippola announced his split from the band in late 2014 due to personal reasons. The trio that had played and stayed together ever since January 2005 was no more.

However, not content with letting all the hard work of the previous decade go down the drain, Simo Laihonen and Ville Rauhala faced this sea change head-on as a challenge rather than a crippling disappointment. Together, they decided to bite the bullet and carry on.

After swift, yet careful consideration no time was wasted in recruiting Tane Kannisto to the band’s ranks. A skilled and well-travelled musician and a trusty brother-in-arms, the Turku-based saxophonist is best known for his work with Edward Vesala’s legendary end-of-the-Millennium line-up Sound & Fury.

Jouni ”Tane” Kannisto first appeared on stage as a member of Black Motor in November 2014 at Rullan Jatsit, a special event for children arranged as part of the annual Tampere Jazz Happening. He will make his recording debut with Ville and

Simo on Rauhala’s tune The Longer the Distance the Sweeter the Sound, to be released in Spring 2015 on a split 7” single with fellow band Rakka.

However, the current Black Motor line-up came out already in March. Originally revealed on the band’s website, new track Interdependence Day will be made exclusively available on the upcoming label sampler of Lumpeela Julkaisut, out in Germany through Nordic Notes.

The next special guest show of the band will happen in June 2015 when American saxophonist Ernest Dawkins joins Laihonen, Rauhala and Kannisto on stage at the Kerava Jazz festival. The expedition is far from over.